A Beauty in my Garden

What a wonderful sight in my garden at the moment... I was thinking a few months back of taking it out or at least chopping it back as it's quite an encroaching plant and it was getting in the way of  my pathway to my indigenous garden. 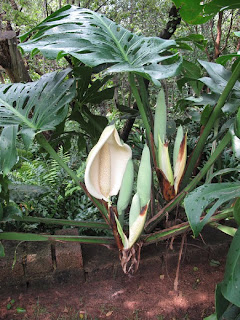 This is a Delicious Monster (Monstera Deliciosa) or Swiss Cheese Plant, native to tropical rain forests of Mexico. This particular specimen of mine has never flowered, and this year it has been so prolific and graced me with the most amazing cone shaped flowers or fruit as some would say. Apparently the fruit of the Delicious Monster is edible, but I wouldn't want to try it, as one man reported Here. But I have read that the fruit tastes like a cross between a pineapple and a banana. The fruit may be ripened by cutting the fruit when the first scales begin to lift up and the fruit begins to exude a pungent odour, then wrapping it in a paper bag and setting aside until the kernels begin popping off. The kernels are then brushed off; they fall away to reveal the edible flesh underneath. The flesh, which is approximately like that of pineapple in texture, is then cut away from the core and eaten. It has a fruity taste similar to jackfruit and pineapple. Eating fruit which has not matured and still has the kernels firmly attached, exposes the throat to the oxalic acid and is dangerous... 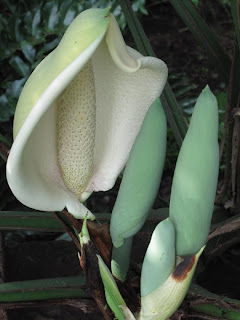 Close-up of the Delicious Monster
I'm still not fond of this plant but look at it now with renewed eyes, it's no longer a hindrance and a 'common' space filler in my garden but something of unique beauty albeit only for a few months of the year. I will however keep it in shape and hopefully it flowers again next year! 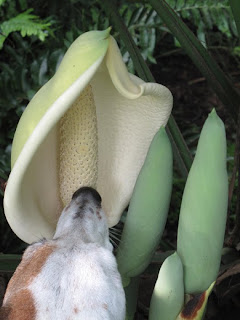 A little friend also had to see what this
wonder was that sprung up in his garden.

Another of one of my indigenous flower paintings. I'm not too sure of it's name, but is very simmilar to the Hog-weed. I would love feedback if anyone does know. I came across it flowering beautifully in the Eastern Cape in December last year.

I found myself up at two am this morning so decided to make use of the time and finish this painting which I had started yesterday morning. This was one aimed at the bin  as I was playing with background colours only and tried to experiment.... think it should still be aimed at the bin! Today I remembered that I have a book by Ann Blockley - Watercolour Textures. She did an interesting exercise with something simmilar, so I think I'll redo this with some advice she gave. 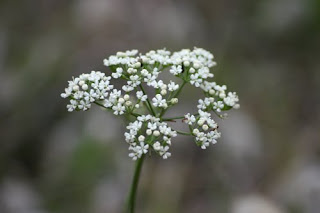 The inspiration of the wild flower painting
Thank you Maree for enlightening me on its name...
It's Queen Anne's Lace Painting is easy when you don't know how, but very difficult when you do. ~ Edgar Degas
Posted by Debbie at 4:57 PM 5 comments: 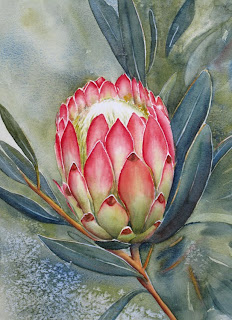 Limestone Sugarbush Protea
Posted by Debbie at 9:15 AM 4 comments:

Debbie
South Africa
Firstly, Thank you ever so much for taking the time to pop in and visit. I am a mother of two wonderful boys. I live in Johannesburg, South Africa. Painting and being creative is something I have pretty much grown up to do. My passion is to paint, I am passionate about watercolours, inspired by the colours of our country's culture, heritage and wildlife.... I'm a real bush girl at heart and love spending time in the wild. Please also take a look at my Art Website which is updated regularly. If you would like to purchase any of my paintings, please feel free to contact me. Enjoy your trip of my regular postings and pop in again soon!

Please be reminded that artwork and photographs in this blog are protected by copyright law and may not be copied, reproduced or used in anyway with out the permission of the artist in writing.

Promote your Page too

Visitors from around the world