A very Happy, Creative and Inspiration year to you. May this, the first year of the decade reap huge rewards and positive attitudes for you all. After settling back at home after a 3 week break, loads of washing done and unpacking out the way, I decided to look back through my sketchbook I took with me and thought I'd share some of the very rough sketches I painted whilst down at the seaside in St Francis Bay on the East Cape coast of South Africa. 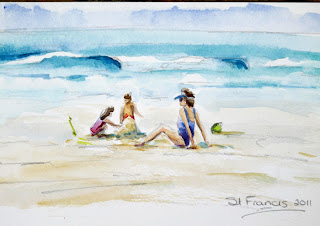 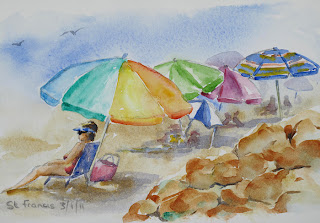 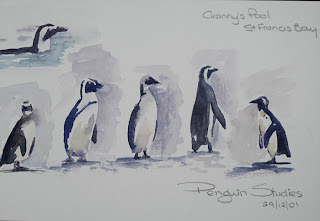 Study of Penguins after I watched Penguins being re-introduced back in to the ocean
I acted on a whim just before I left for my holiday and got wrapped up in the huge global Anti-Rhino poaching issue. I flew in 'horns and all' and suggested a campaign called Artist Campaign to HELP Save the Rhino on Facebook. This campaign is for artists of all genre world wide to stand united and paint, draw, sculpt, write, photograph rhino's. Some or all proceeds of sales can be donated to a worthy organisation who support  rhino conservation.  So far the interest is there, I just need to fine tune the logistics, get support and spread the word. This is where you can help too if you feel the need. The more the merrier and the greater the reward for the salvation of the rhino.

I am absolutely appalled by the behavior of some people who have senselessly maimed and slaughtered innocent rhino's for their horns and left some babies orphaned or dying from starvation. The horns are been sold to the East for medicinal and healing purposes and fetch incredibly high prices. Studies show that the properties in the horn are the same as your fingernails....Keratin, Calcium and Melanin. The horn has been prized for centuries and will take authorities a hundred years to eradicate a myth.

The shocking statistic is that last year alone, over 300 rhino's were killed...... that's almost 1 a day!!!  I want to cry when I read these stats! I so want to help in some way to stop the barbaric slaughter but cannot do it alone, this is where you come in. If you are keen to join me in the fight to help this shy, strange almost pre-historic animal from extinction, please pop over to my link above and show your support. I have more information on the Campaign there.

I did a few studies of rhino's on holiday just playing with ideas for a larger painting I'll do for the Campaign. Hope you'll join me! 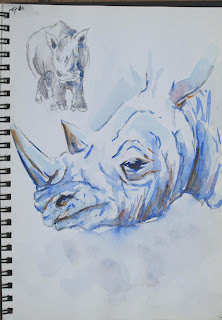 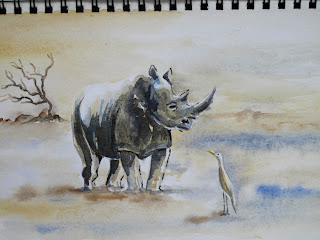 Debbie
South Africa
Firstly, Thank you ever so much for taking the time to pop in and visit. I am a mother of two wonderful boys. I live in Johannesburg, South Africa. Painting and being creative is something I have pretty much grown up to do. My passion is to paint, I am passionate about watercolours, inspired by the colours of our country's culture, heritage and wildlife.... I'm a real bush girl at heart and love spending time in the wild. Please also take a look at my Art Website which is updated regularly. If you would like to purchase any of my paintings, please feel free to contact me. Enjoy your trip of my regular postings and pop in again soon!

Please be reminded that artwork and photographs in this blog are protected by copyright law and may not be copied, reproduced or used in anyway with out the permission of the artist in writing.

Promote your Page too

Visitors from around the world